This year’s edition of the Montreux Volley Masters opened yesterday. After a one-year break, the world’s most prestigious invitational women’s tournament is back. Each year the organizer invites 8 national teams among the best teams in the world. The event takes place outside the official tournaments of the International Volleyball Federation (FIVB) and the results do not count in the ranking of the teams.

For the teams it is a unique opportunity to measure themselves against the other top teams. They are able to check their strengths and what needs to be improved. Furthermore, they can test different strategies and evaluate what works best without any of the pressure of the score points. For the public, it is a unique event where one can watch top class volleyball right from the very first day. 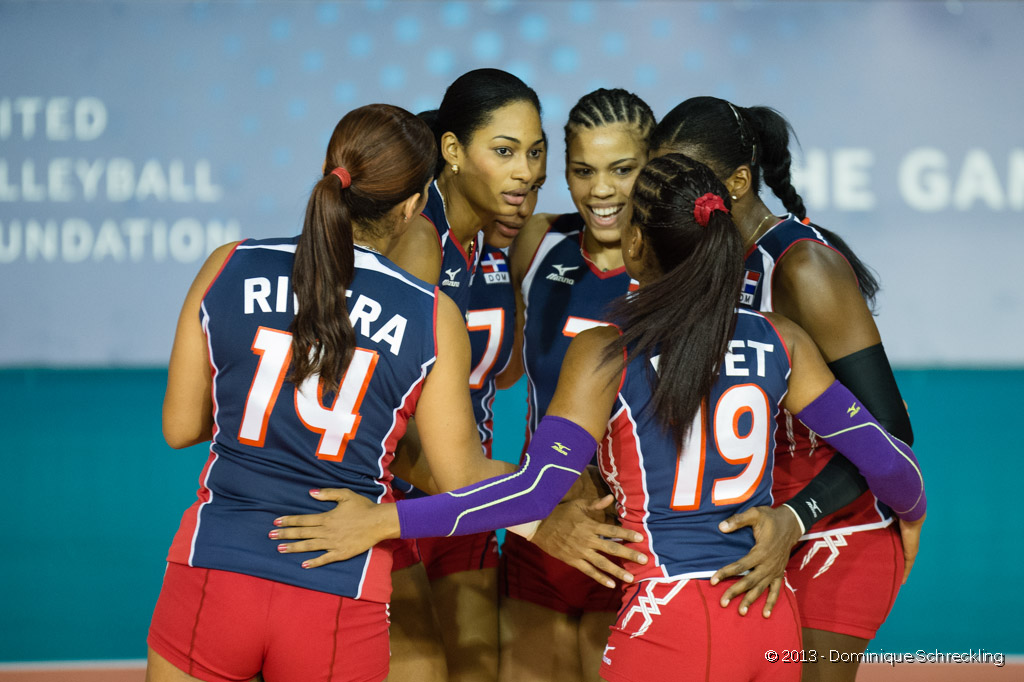 This year’s 28th edition sees the participation of Brazil (FIVB ranked 2nd), certainly the biggest sensation for the organizers! The South Americans, twice Olympic champions, are probably the most interesting women’s team in the world at this time. This darling of the public will be challenged by Japan (3rd), Italy (4th), China (5th), Russia (6th), Germany (8th), the Dominican Republic (10th) and, for the first time since 1996, Switzerland.

Volleyball fans all around the world can expect great moments and emotions: will the Swiss team be able to create the buzz after 16 years of absence? Did Italy overcome their Olympic disappointment? How has the fast play of Japan and China evolved? Will Russia, reigning world champion, be at the top again? What about Switzerland’s neighbor Germany: are they ready for the European championship? Will the Dominican Republic be able to create a surprise everyone?

On the first day of the qualification, the public enjoyed the matches of Japan against the Dominican Republic, China against Russia and Brazil against Switzerland.

Japan vs the Dominican Republic 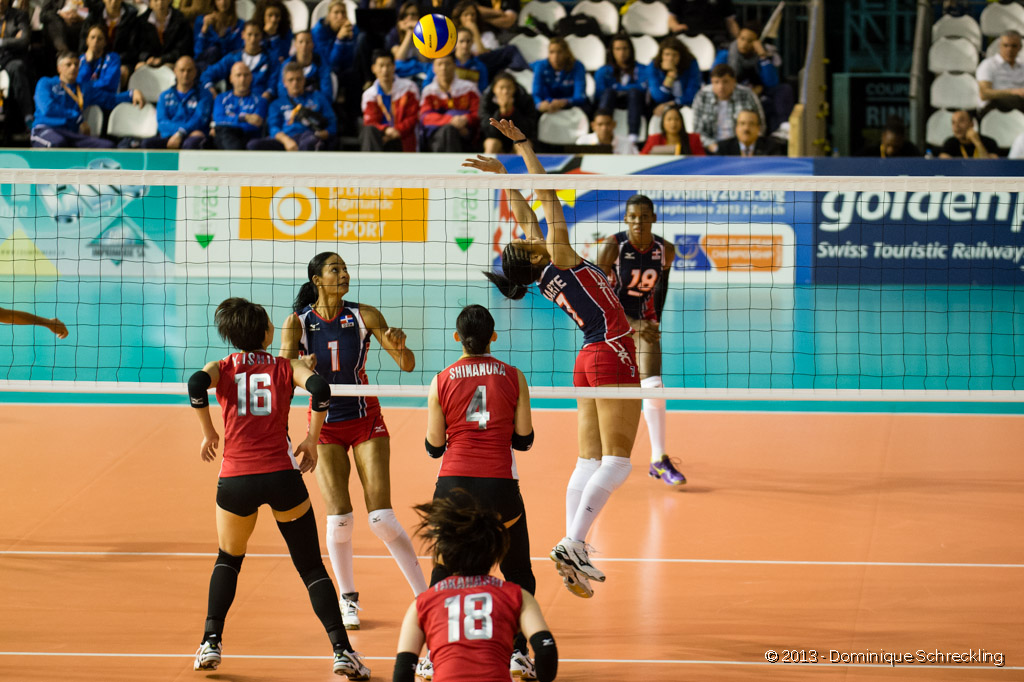 The teams of Japan and the Dominican Republic opened this 28th edition of the Montreux Volley Masters.

The team of the Dominican Republic is considered as the outsiders who could create a surprise during this tournament. It has shown promising results over the last couple of years with the highlight of obtaining a fifth ranking at the Olympic Games last year in London. Most players of the team are currently performing in the Dominican Republic, in Peru or in Puerto Rico. It is a young and very athletic team. All nine hitters who attended the last Olympic Games could reach between 3.20 and 3.30 meters (10.5 – 10.8ft).

The Dominicans took the advantage from the beginning of the match by making only a few errors and offering the fans a beautiful game. The Japanese team, which is known for its fast game, had difficulties staying at the same level as their opponents. The first encounter ended 3:0 for the Dominicans (25:19, 25:16, 25:22). 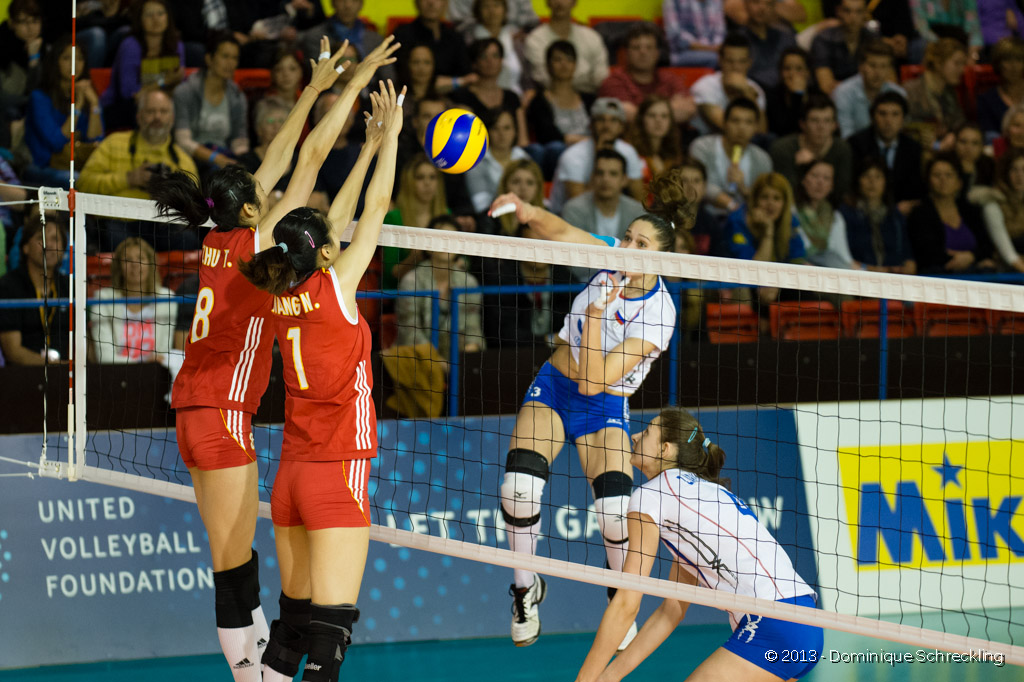 In the second game China was defeated by Russia 3:1. Respectively 5th and 6th in the current FIVB World Ranking, both teams have changed a lot after the last Olympic Games and presented new players. The Chinese came to Montreux with a very young team -every player is 17 or 18 years old- and thus didn’t start as a favorite. On the other side of the net, the new coach Yuri Marichev aims to bring a new style with faster plays and notably a three-person block. The first set was tied until Daria Isaeva made two aces towards the end and helped the Russians close the score on 25:22. After a good start in the third set, the Russians made too many mistakes and could not keep their advantage to finish the game. The Chinese were able to come back to 22:22 and finally close the set at 26:28. Russia came back strong in the fourth and last set, which they won quickly 25:15. 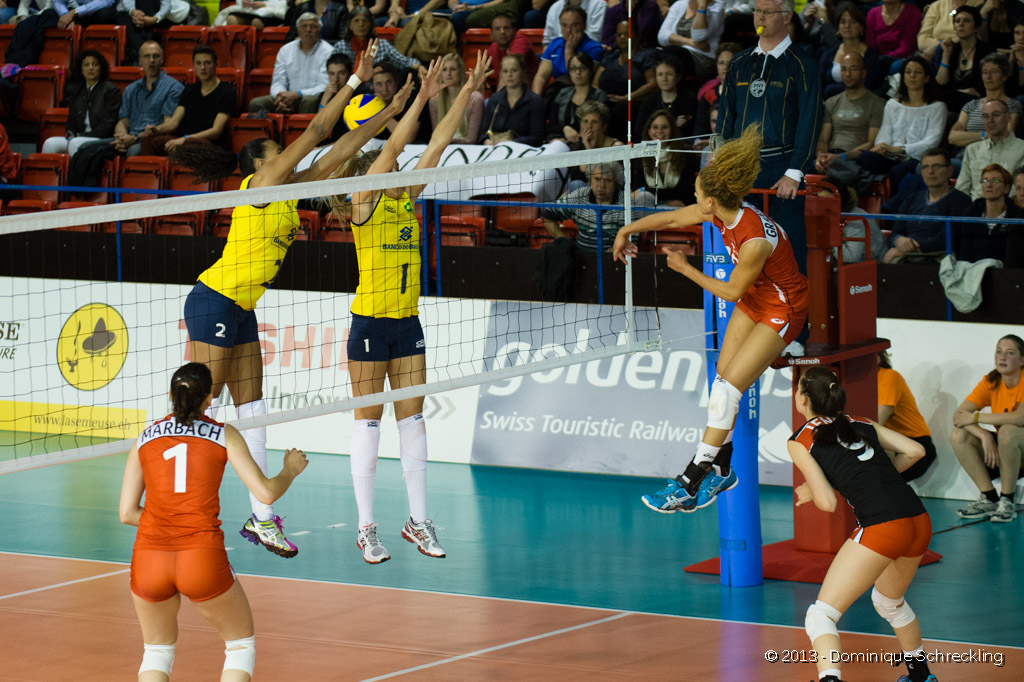 The young Swiss players have worked very hard over the past two years and deserve a place in this great competition. Three months before hosting one leg of the European Championship (September 6th-11th in Zurich), Switzerland is being confronted by the world’s elite teams and this is an interesting test before this top European Autumn appointment.

Switzerland won the Montreux tournament back in 1987! Six years later, the team coached by Lorne Sawula entered into the collective memory when reaching the semi-finals after an unbelievable victory against the USSR, which had won the Olympic silver medal in Barcelona! But afterwards, the Swiss team did not prove to be competitive enough, ending 8th in each of their last participations between 1994 and 1996.

On this first day of the games Switzerland lost their opening match against the Olympic champion Brazil 0:3 (21:25, 23:25, 10:25). Despite the domination of Brazil at the end of the game, the young Swiss women can still be satisfied with their performance. The team led by head coach Svetlana Ilic made an impressive return to Montreux. In the first set, the Swiss squad managed an auspicious start, led by Laura Unternährer and Laura Sirucek. Although Brazil was able to speed up in the second half (16:12), the Swiss closed the margin to 19:19. The Brazilians, however, moved back in front to win the first set. The second set did not clearly show the FIVB World Ranking difference between Brazil and Switzerland, respectively 2nd and 109th. The Swiss setter Kristel Marbach kept pressure on her opponents with precise and successful attack combinations. Nevertheless, the experience of the Brazilians ended up paying off closing the set at the fourth set ball. In the third and last set, Svetlana Ilic’s team was not able to keep the same level as before. After 83 minutes, Cristina Juciely Silva killed the first match ball for Brazil and secured for the Olympic champions a successful start to this 28th Edition of the Montreux Volley Masters.

These were the encounters of the first qualification day of the event. The public has still plenty of occasions to see world class volleyball until the finals on Sunday, June 1st in Montreux.