The Harmony of the Seas Overview

As many of my readers know, I have been fortunate to cruise on and write about, a number of Royal Caribbean International ships.  Over the years I have covered their Freedom Class ships including the Navigator of the Seas and the Freedom of the Seas.  More recently we were invited to cover the U.S. inaugural cruise on the Anthem of the Seas.   Now our most amazing experience of all covering the new Oasis Class ship, the Harmony of the Seas. 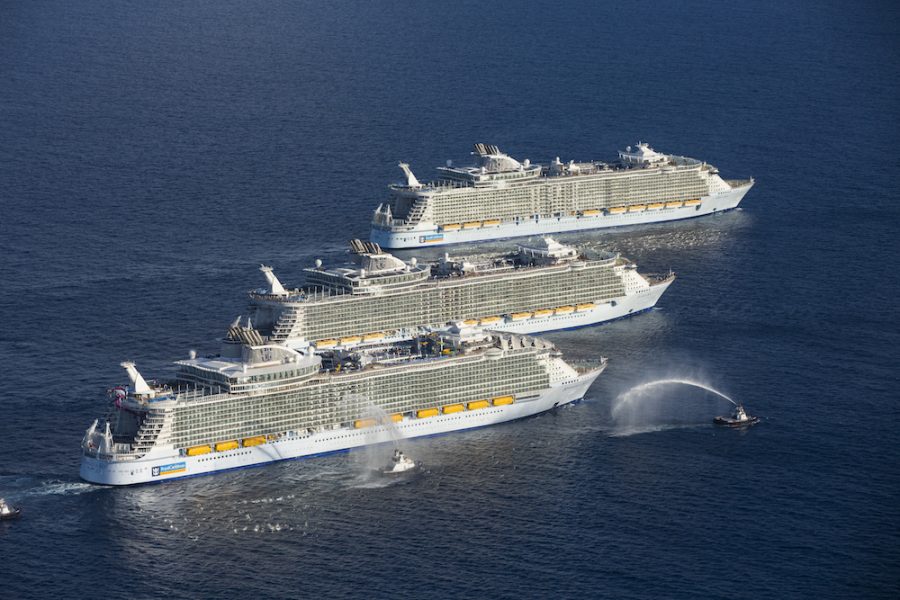 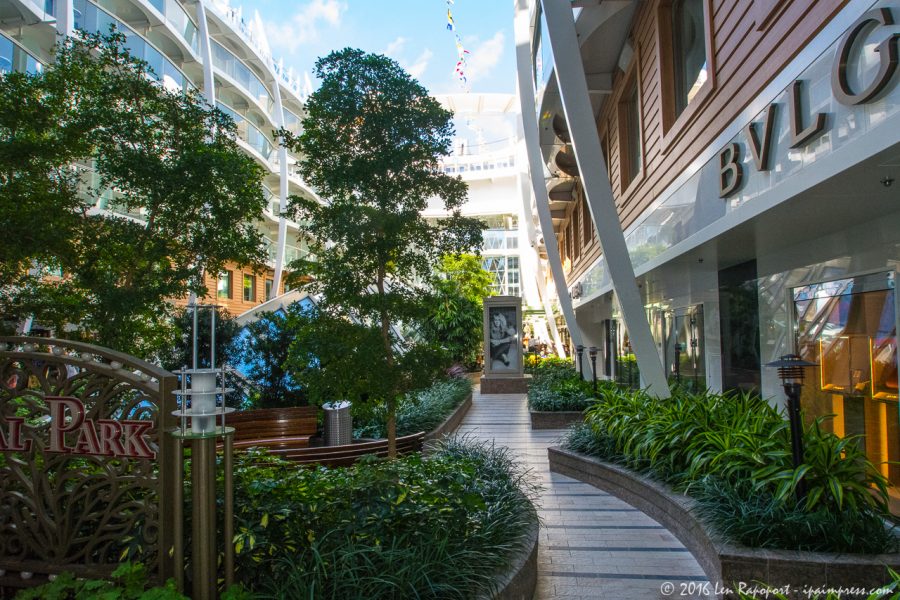 The ship has 2,747 staterooms, and a capacity of 5,479 guests with close to 2000 crew members.  If you were to stand the Harmony upright it would be taller than the Eiffel Tower standing at a whopping 1188 feet.  The ship has 20 restaurants with eight specialty restaurants .

On Deck 8 guests can enjoy a walk through its own replica of Central Park a magnificent open air garden.  Here you will find many of the restaurants, luxury boutiques, wine bars, Chops Grill, 150 Central Park and other eateries. 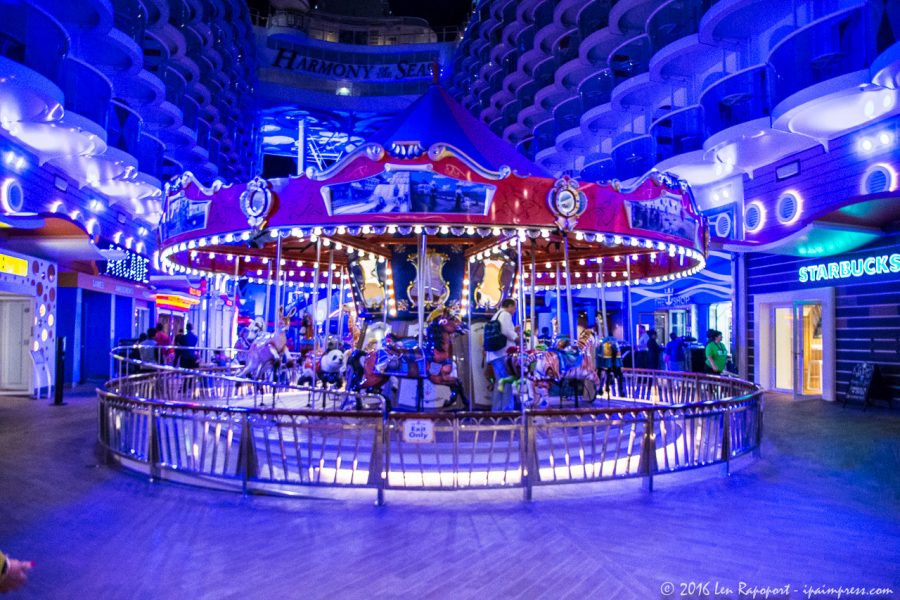 The Boardwalk is on the aft of the ship where you will also find the Aqua Theater, an open-air stage which hosts diving, aerial and acrobatics shows.  Of course you will want to take a ride down the Ultimate Abyss a dry slide complex, with two ten-story tall enclosed slides. There are more restaurants , including Johnny Rockets and Starbucks a Carousel with a Playland and arcade games.

As you walk through the ship you will see over 11,000 works of art, it is breathtaking to say the least.  In the Promenade they even have the “Rising Tide Bar” a bar platform that raises and lowers three floors between the Promenade level and the Central Park level. 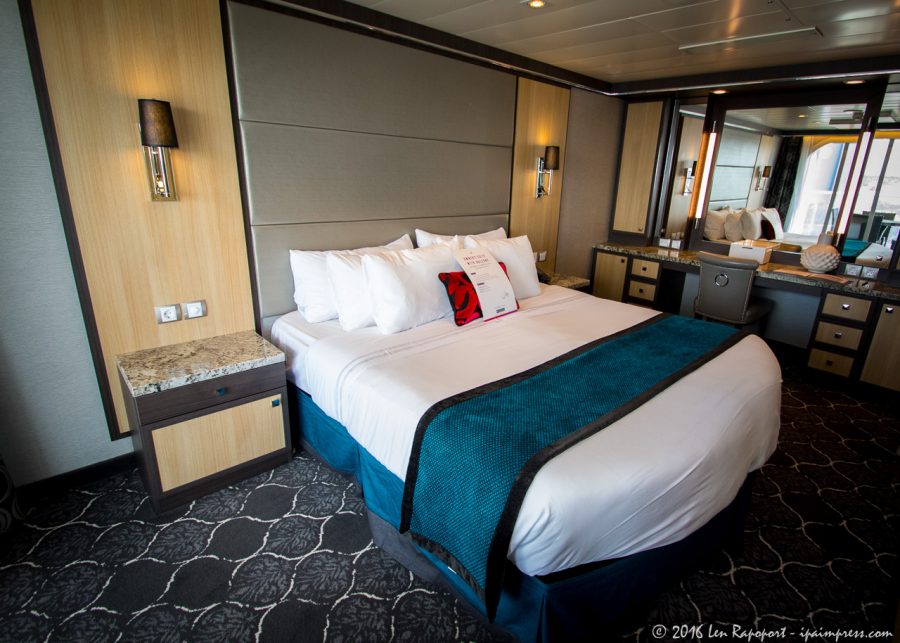 Guests can select from a number of stateroom options including luxury suites to staterooms with an ocean front views. The  interior cabins are the least expensive and the larger ones feature a Virtual Balcony which is a floor-to-ceiling high-definition TV that is combined with draperies and real-time video streaming from the ship’s external cameras. This then creates the illusion of an actual balcony. They even can provide sea sounds.

Of course you have many other options including cabins facing Central Park or the Boardwalk.  There are also one passenger studio cabins and the Family Presidential Suite group accommodating up to 14 guests.

Some cabins even have connecting doors to accommodate families or groups traveling together, others have additional beds including  sofa beds or pull-down beds that come down from the ceilings. If it is a cabin with an ocean view or a suite, there is enough choices for every budget and requirement.

For even more information on this amazing ship click here.

Our Adventure Begins At Port Everglades

We took a flight to South Florida and proceeded to the Port Everglades in Ft. Lauderdale to board the ship.  The cruise was for invited guests from the media and the travel industry and I am sure many other VIP guests.  It was a two night voyage which meant we only had one and a half days to cover this enormous ship.  Certainly not enough time to dine in the many eateries on the ship, nor experience all the activities or shows. 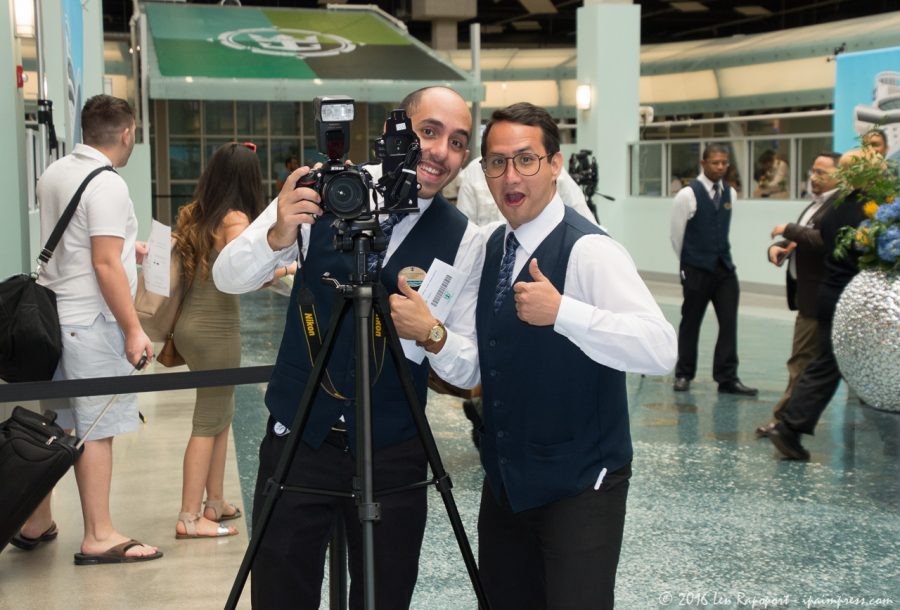 Although I couldn’t take advantage of any of the activities on the Harmony myself, I was able to photograph and take videos of some of the more popular ones.  A short list of those activities include the Rock Wall, Zip Line, The Abyss, Flowrider, Mini Golf, Ice Skating, the Fitness Center and a fantastic water park for the kids called “Splash Away Bay”. Of course they also have five pools and many other exciting activities on the ship. 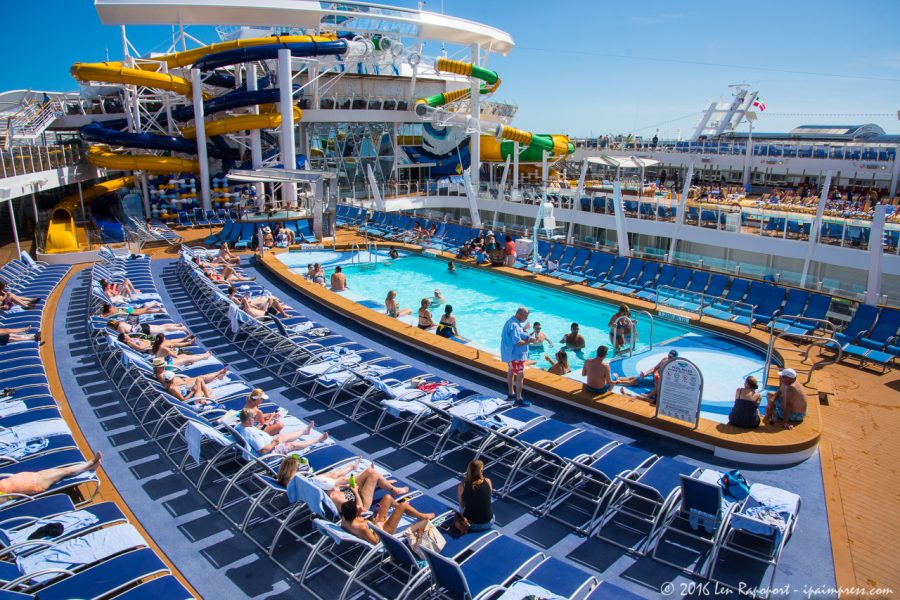 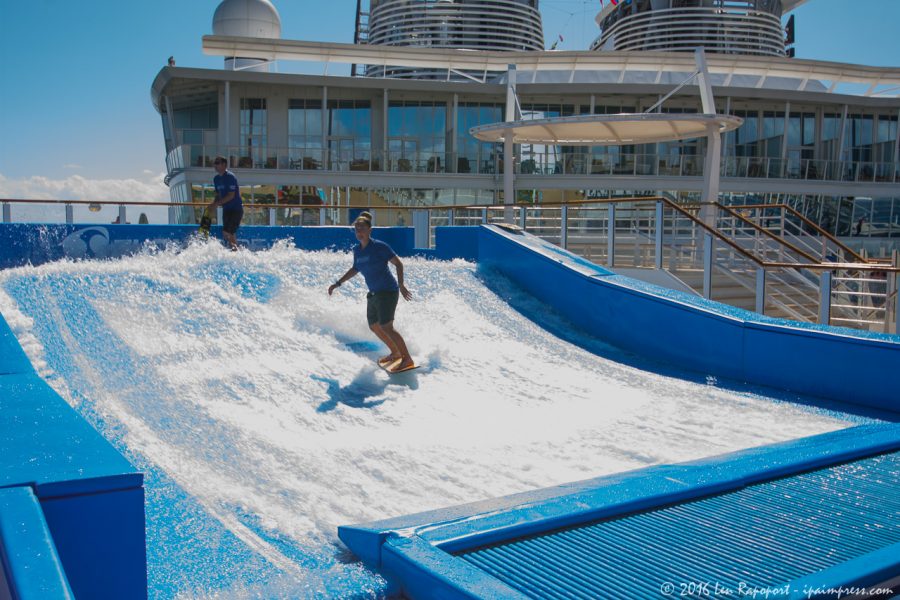 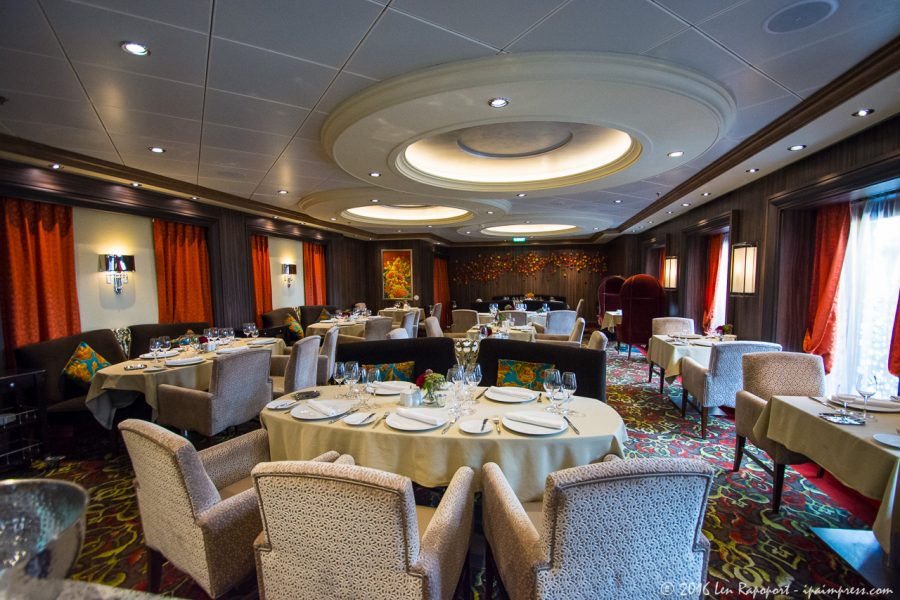 A day and a half on the ship meant only a five meals so I had to select a couple of dinner restaurants, Windjammer for breakfast and a lunch and Johnny Rockets on our first day.   Our first night we dined at the Main  Dining Room and the second at 150 Central Park.  At 150 the food was exceptional, we would suggest adding this to your must dine list.  In our video you will learn a bit more about Dining and Entertainment options on the ship from executive chef David Reihana 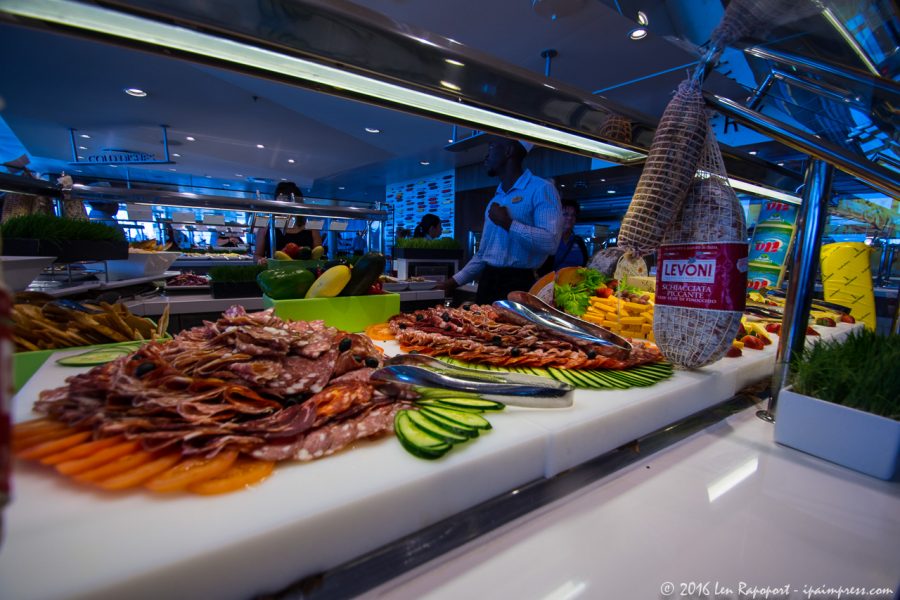 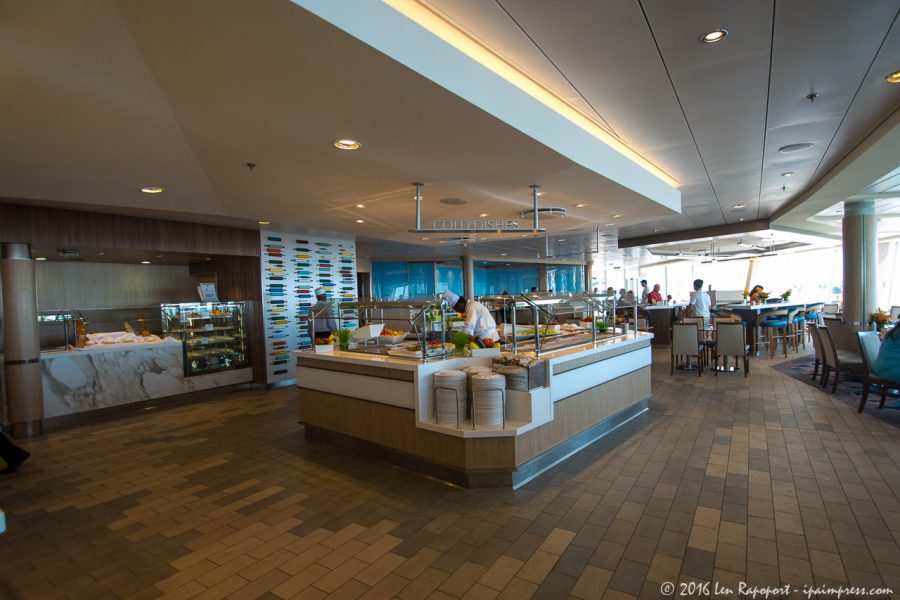 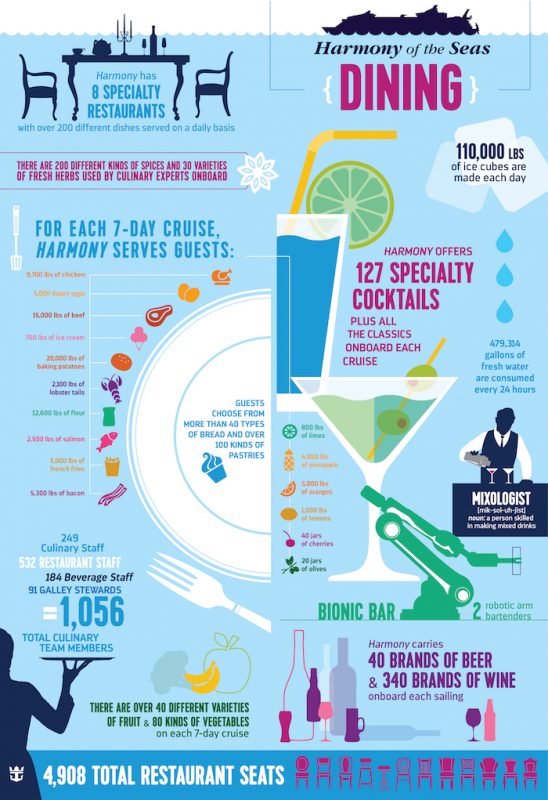 One of the great features on most if now all RCL ships is their  “My Time Dining”  This enables each guest to select which restaurant and time they want to dine.  From their Windjammer which is the breakfast, lunch and dinner option to the many other restaurants or dining locations on the ship.

There are a number of dining options.   Complimentary, Specialty Dining both A la carte, and cover where you pay a fee for items you order.  You can see a full list of restaurants on their website.   Reservations are required at some of  restaurants.

We had our first lunch at Johnny Rockets.  It was located on the ships Boardwalk, right next to the arcade and carousel and Aqua Theater.  Yes they have a real carousel on board the ship.  The only thing the carousel didn’t have was a chance to catch a Brass Ring .  As a child riding on Merry-Go-Round’s in Coney Island we used to have so much fun leaning over to try to catch a brass ring that came out of an arm feeding steel rings and one made of brass.  If you caught the brass ring you earned a free ride. 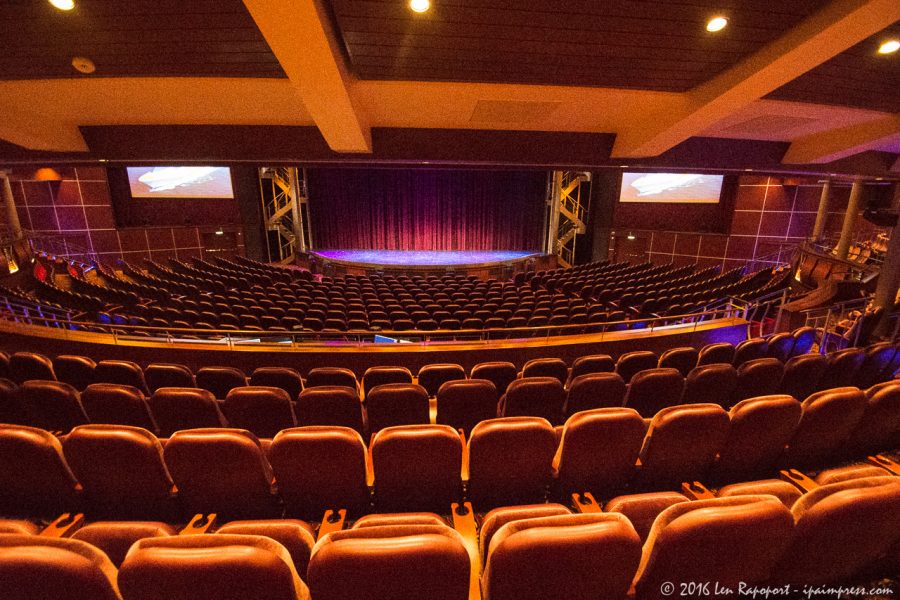 Where do we start?  There is so much to do and see on this ship, you need to book your cruise on a back to back.  That means you book two seven-day cruises back to back.  Remember, cruising on a ship like this is not about the destinations.  Frankly, I never get off the ship at the islands other than their own private beach on my cruises.  We have been to the Caribbean so many times, I would rather spend the time on the ship.

The entertainment on the ship is better than any Broadway production I have seen.  The size of the theater is enormous.

The main theater onboard Harmony of the Seas, the Royal Theater, is a spectacular, state-of-the-art space that enlists 21st century technology to create a performance environment that supersedes traditional theaters. Seating 1,380 guests, the Royal Theater is home to two headline shows presented by Royal Caribbean Productions: 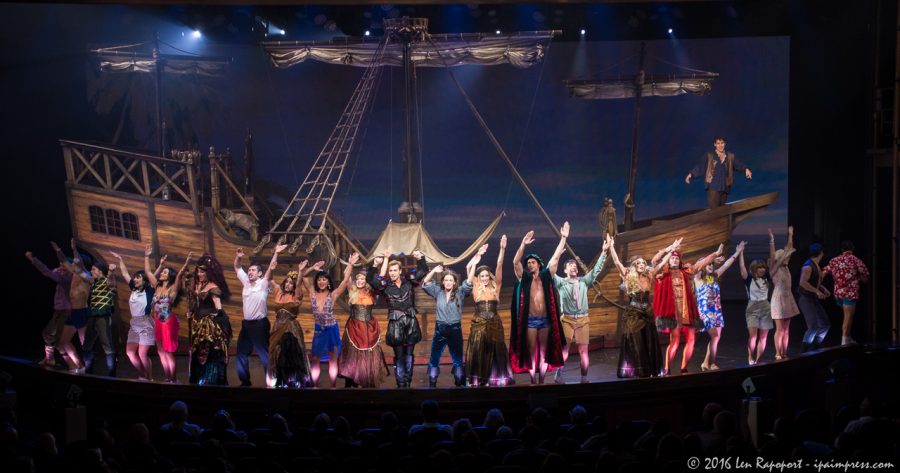 Now if that isn’t enough, we also have the  AquaTheater, the distinct high diving, acrobatic performance space introduced by Royal Caribbean with the Oasis class of ships. Two shows in the Aqua Theater.

Finally the Ice Shows in Studio B.  Stunning multimedia visuals, audio and state-of-the-art technology provide a sight and sound theatrical extravaganza.  Guests will watch as the surface of the ice rink in Studio B transforms before their very eyes.  Two wonderful shows that you won’t want to miss. 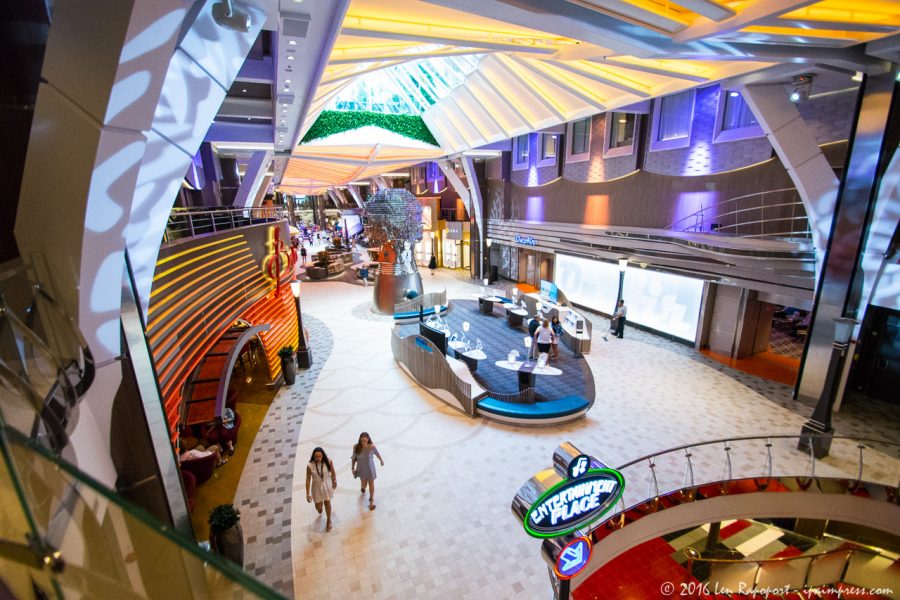 The Harmony of the Seas visits either the Western or Eastern Caribbean.  The Western Caribbean 7 night cruise sails out of Ft. Lauderdale, onto Labadee the RCL Private Beach in Haiti, onto Falmouth, Jamaica and onto Cozumel, Mexico.

The cruises to the Eastern Caribbean from Ft. Lauderdale, onto Nassau, Bahamas, then to Charlotte Amalie, St. Thomas and finally to Phillipsburg, St. Maarten.

Depending on the date the itineraries will vary and on one Eastern Caribbean Cruise it goes from Ft. Lauderdale to Phillipsburg, St. Maarten, to San Juan, Puerto Rico and finally to Labadee, Haiti.

On the ship we had the opportunity to interview three of the senior staff, something I like to do on each ship I cover.  The ships Captain, Gus Andersson explains a bit more about the engineering that went into building this ship and how it can maneuver into ports without the aid of tug boats, something older ships must use.  The newest RCL ships don’t even anchor anymore they now use a computerized system call Dynamic Positioning is a computer-controlled system to automatically maintain a ship’s position and heading by using its own propellers and thrusters.

In our second video we had an opportunity to take a brief tour of the kitchen and chat with RCL’s Corporate Executive Chef,  David Reihana.  David gives us a glimpse into the many dining options on the ship and a bit more on the enormous undertaking in operating 20 dining locations plus one for their crew.

Finally we had the pleasure of meeting the ships Cruise Director, Abe Hughs.  The cruise director is not only responsible for all the activities and entertainment on the ship.  His job is to make sure you enjoy yourself on the cruise.  So he is involved in all the entertainment and all the activities.  He is the one that most people see on the cruise, he is the emcee for events and shows, he makes the announcements on the ships public address system, yes the morning wake up call too.  Abe is a professional he is an outgoing, and a fun-loving personality with great organizational skills.

I have uploaded all of my images to my Flickr profile and you can see and even download the ones you like (for personal use only) from the collection.

All images are © Len Rapoport 2016, for permission to use any on websites or for other applications please contact me. Click Image below to see the entire album. 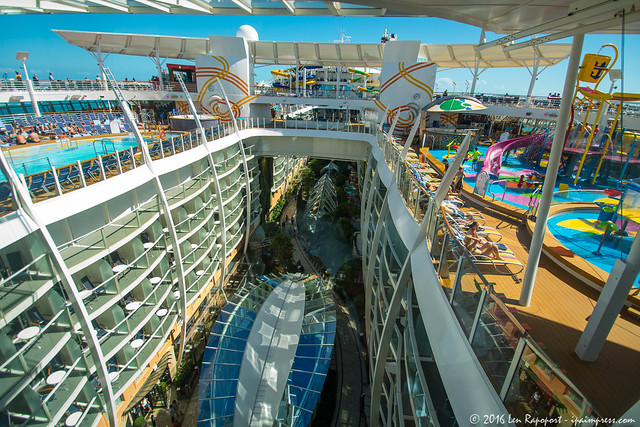