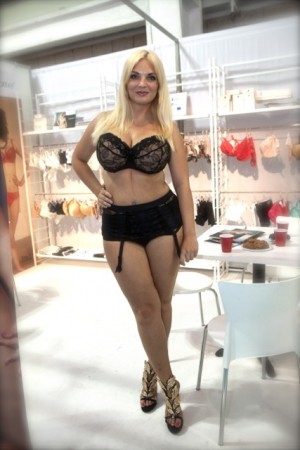 The Curve NY Show for 2013 was a vast improvement over the 2012 show and was held from August 4-6th at the Javits North Convention Center.  There were 282 brands being showcased at the show and this years show spotlighted 57 swimwear companies.

I noticed  men’s underwear and some sportswear areas that the Curve management wanted to build.  Full figured fashions and shapewear were also strong at the show and I noticed a big increase in new or start-up companies.  Many new companies have found the internet a good way to start their business.

Retailing their products on the internet is a great way to test new styles, fabrications and retail prices.  Those that have had success on the net are now looking to broaden their distribution and were at the show to introduce their lines to the many specialty and department stores that attended the show.

Almost fifty percent of the companies exhibiting at this show were international brands.  Proexport Colombia, was set up to attract brands interested in the sourcing opportunities offered by Colombia through the free-trade agreement. We had an opportunity to work with and select one such company manufacturing in Columbia company for our Best of Show.

A panel discussion was held to discuss “The benefits of carrying swim in your lingerie store” For many lingerie and foundations retailers adding swimwear becomes a natural fit and creates a new product line that should also increase store sales and customer traffic.

The show also provided learning seminars including the popular Eveden Fit Seminar.  To help exhibitors in “getting paper” at the show,  incentive programs  were offered for buyers to open new accounts and to place orders on site .

My History In The Industry

In the mid 1960’s I worked as a salesman in the New York area for a company that no longer exists, Lovable Bra.  The word “brassiere” was gradually shortened to “bra” in the 1930s so most companies had the word bra in their names.  Back then there were a number of leading bra companies including Warners,(the company that first introduced cup sizes) Maidenform, Exquisite Form, Playtex and others.  It was the day of the circle stitched “Bullet” bra and Lovable was one of the leading companies then and probably best known for their $1 bras.

I called on many specialty stores and serviced some department and chain stores. Our garments were either boxed for racks, which we provided or sold in boxes of 6 for the specialty operations or in some cases used on table bins.  Yes there would be a pile of bras in a table bin and women would wade through the garments to pick out their $1 bras.

Later in my career I worked in the women’s apparel industry and was instrumental in introducing Women’s large-sized sportswear to the market. I worked side by side with Perry Ellis, prior to his fame as a fashion designer, at Vera Sportswear.  Vera was a wonderful artist who was famous for her gorgeous use of color and bold floral designs.  The company was famous for their stitched crease pull on pants and their floral print blouses.

I spent many years in the apparel business, so covering this show for me, was a journey into my past.  Some of the people I met remembered Lovable and  others were interested in the Women’s Sportswear business so I felt a bit nostalgic at this show.

Why We Didn’t Include Some Of The Major Manufacturers 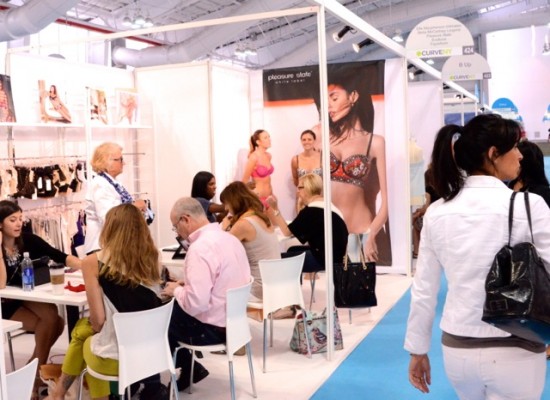 Working with buyers…Click to Enlarge

Because security was high at this show many companies prohibited us from taking photos for publication or for inclusion in our video and we respected their wishes.  Many garments were right off the design boards and in our internet world, styles could be copied in days after appearing on YouTube or in an article we might publish.

As a result, we were unable to interview those companies or cover them for this article.  Other companies that are popular or well-known were also too busy to talk to us and were swamped with buyers. You will see some of those brands, and images of their booths,  in our videos and this article.

Because this is a working show and orders needed to be generated, getting good press didn’t seem to be on their priority list. So our restrictions at this show actually helped us in narrowing down the companies we were going to visit.  Our mission now was to discover some of the hidden gems at the show, and gems we found.

Garments For The Full Figured Woman

There were many companies now catering to the full-figured woman.  From beautiful and sexy lingerie to body shaping foundation garments it was obvious that this market is only getting bigger and bigger (no pun intended).  As you can see in some of our photos, big can also mean sexy and we visited the Charlotte Lingerie booth at the show and met their beautiful model and sales manager, both flown in from Poland.  We wanted to stay longer at this booth, but had to interview our picks for Best Of Show